The new all-weather pitch at Riverside Lands was christened in the rain, and proved that provided the ball did not slip out of the hands, open rugby could be played successfully in conditions where in the past only the forwards would have got a game. Last season, Chiswick won the home fixture against Hackney, but got hammered in the return. Hackney proved pretty solid this time, but could not quite cope with the enthusiastic energy with which they were attacked by an exciting Chiswick fifteen. At least fifteen to start with – then fourteen and then thirteen, but even then the attacking continued, after yellow cards, possibly for a dangerous tackle and for kicking the ball away.

Chiswick, in fact were dominant from the off, with Ollie Snook’s long kicks causing problems for the visitors, and gaining huge amounts of ground. The pack gained early control of the scrums, giving Sam Leslie-Miller plenty of room to run from the scrums. After five minutes Chiswick were 7 points up, a devastating break down the right by Snook culminating in an inside pass to Eitan Humphreys, who touched down under the posts, with Snook adding the conversion. A couple of minutes later, Hackney’s No.11 kicked a good penalty goal from around 35 metres. Chiswick were using inside centre Max Burrows to crash into the Hackney defence, a tactic with which Hackney coped reasonably well. Chiswick were getting more possession than usual from their own lineouts, and credit should go to the late replacement hooker Gavin Nichols. Crucially, they opted for a five metre lineout after being awarded a penalty and Leslie-Miller took a clean catch to set up a maul, which led to a try for Simon Allen-Clarke as the pack surged over the line. Snook pulled the kick left of the posts.

The first and second yellow card followed soon after with the referee apparently in gentle lecturing mode. Chiswick did not appear too worried and did well to get back to full strength without conceding any points. They immediately rubbed salt into the wound, pressurising a retreating Hackney pack into losing control of the ball in their 22, allowing Leslie-Miller to pick up and offload to Snook who touched down under the posts before slotting the conversion on the stroke of half time.

Chiswick applied early pressure in the second half, and an attack involving the ubiquitous Jon Olley was carried on towards the left corner by James Bunbury, who made a half-volley pickup look very simple before transferring the ball neatly to the flying figure of Peach outside him, who scored the bonus point try in the corner. Bunbury then made another break, taking a tight offload from Burrows to break through the line but unfortunately being tapped at the last moment by the covering Hackney wing. The welcome return of the centre partnership between Burrows and Bunbury was one of the factors which should have left coach  Andy Barrington in a very good mood at the end of the match. The final thirty minutes strangely produced no further score, as Hackney’s defence remained obdurate, and Chiswick perhaps relaxed a little, although subs Ben Barkham, Rick Bryan and Russ Dovey all piled in to good effect, Bryan in particular standing out in some promising moves. 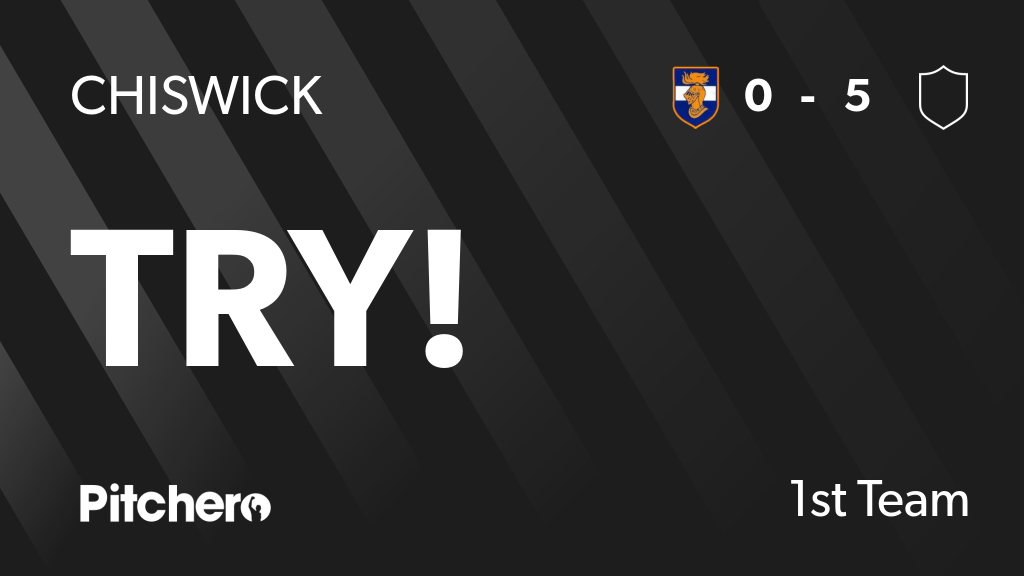